Sequel to the mythpunk novel, THE AUTOMATION, has a title…
The second volume in the Circo del Herrero Series has been given an official title: The Pre-programming. This indie novel follows where the The Automation left off. In The Automation, the story follows nine ancient capital-A Automatons of Greco-Roman myth. Publishers Weekly called the book “charming” and Tales of the Talisman gave it 4.5 out of 5 “talismans.” 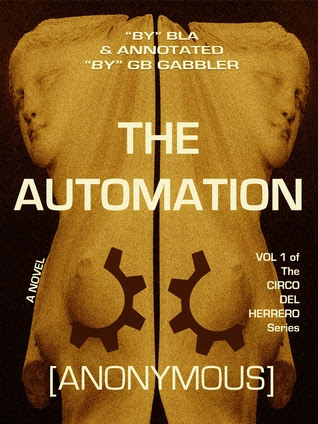 The first novel calls itself a “Prose Epic” because of its subject matter, but is otherwise a purposeful implosion of literary gimmicks: A Narrator  and an Editor frame the novel. Gabbler’s pompous commentary (as footnotes) on the nameless Narrator’s story grounds the novel in reality. Gabbler is a stereotypical academic who likes the story only for its so-called “literary” qualities, but otherwise contradicts the Narrator’s claim that the story is true. The story makes for something of a palimpsest, letting the reader decide what is truth and what is a cover-up.
The Pre-programming will continue the Narrator’s story about the twins Odys and Odissa Odelyn. Why did Pepin J. Pound kill himself to release his Automaton? Will Odissa get an Automaton? Will they stop Leeland from killing off all other Masters? This and more will be solved–only to open Pandora’s box a little more. The release date is still to be announced.